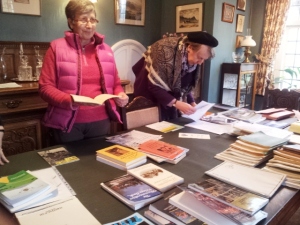 Caroline and Kate searching through the Abberley WI archive

A small number of the Abberley Lives team gathered at Sheena’s house yesterday to have a look at what was in the mysterious Box of Abberley WI records.

Sheena and Caroline had already done some sorting work and proudly showed off their discoveries to Kate, Cherry and Jenni.  Most satisfyingly, the WI committee minute books and meeting record books go back to 1940. Unfortunately, there is an unexplained 3-year gap between the resolution in 1940 to exhort members to ‘do their bit’ by knitting for the troops, and a meeting in 1943 to discuss ‘re-starting the Abberley WI’. The mystery deepens – what were Abberley WI up to between 1940 and 1943?

There were lots of fascinating publications from the National Federation of WIs, instructing local members how to run meetings and orchestrate campaigns and debates in their villages.  Nobody had any excuse not to manage with so many handbooks to support groups!

Cherry was particularly captivated by a book from the 1920s called ‘The Social Half-Hour’ which had a range of ideas for short sociable activities that would amuse and provide conversational topics.  Watch out, we think she plans to try some out at the Christmas party!

The next stage is for Sheena and Caroline to compile a simple list of all the items so that we know what’s in the box and can work out which items will be helpful in our researches.  Both ladies have agreed to act as custodians of the archives and make sure that we all look after them properly.  So, clean hands, pencils only and NO cups of tea near the documents!

We also discussed the 5 proposed research strands that Jenni has drawn up after consultation with the group and with Professor Maggie Andrews from University of Worcester.  Copies of the list will be sent to everyone so we can discuss and confirm them at the next meeting on 21 November.

For a sneak preview, go to Our Researches page and have a browse.