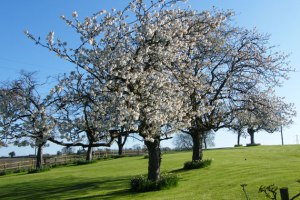 As I mentioned in my previous blog I live in what was once a barn. Our back garden and several adjacent fields were orchards producing cherries, damsons and plums. We have seen an aerial photo taken in 1960 which clearly shows the area covered in trees. The trees that remain are now about 80 years old and sadly are reaching the end of their life. When we first moved in we had 7 old cherry trees and 2 damson trees remaining, however earlier this year one of the cherry trees blew down in the gales, another cherry and one of the damson trees were taken down as they had died.

Talking with local farmers and orchard owners it is clear that even as recently as 40 years ago the sight of blossom filled trees in the spring would have been evident everywhere as most farms had their own orchard. Our barn was used for the collection and storing of fruit ready to go to market. Getting the fruit to market at the right time was crucial and Roy Neath told me the story of his father going to market in his Austin A70 car with a trailer full of plums in ‘chips’. As he was going through Little Witley the tyre on the trailer exploded, so pressed for time, he took the car seats out of the car, loaded all the ‘chips’ of plums inside the car and abandoned the trailer and seats at the side of the road. He got to market on  time, sold the plums and returned to collect the seats and trailer on the way home. Roy also tells the story of the sign on the side of our barn advertising fruit for sale listing the cost for ‘chips’. Apparently several people from a coach party visiting the church called in to buy some chips. They went away disappointed when they discovered that the ‘chips’ were the baskets to put fruit in and not chips to eat!

What follows is an extract from the ‘Abberley Lives’ book.

Worcestershire is known as a fruit growing area and Abberley was no exception. Most farms had an orchard, turning the landscape blossom white in the spring. Many small orchards provided a bonus crop for the farmers – damsons sold so well that many trees were planted in the hedgerows providing an extra crop to pay the ‘rent’.

Perry pears were grown for cider and farms such as Church Farm would press their own to make the cider for the threshing gang after a hard day’s work. Apples and plums were another common crop, with different varieties planted to guarantee a longer picking season. Cherries were usually a prolific crop but farmers had to be quick to get them before the birds did. At Hillhead Farm, they strung a rope across the yard and over the top of the barn. Hung at the other end in the orchard were metal sheets that made a mighty clatter to scare the birds whenever the rope was pulled!

Soft fruit harvesting has always been a manual activity that generates seasonal work. In Abberley there were several women who would pick when the time was right. Plums were taken to market in ‘chips’, big baskets that held 12lbs of fruit. It was vital to pick in time to prevent fruit becoming over-ripe when it got to market in Worcester or Birmingham. Cherrypickers climbed ladders to the top branches, taking care to pick the fruit on the stalk and prevent ‘bleed’ which could cause a whole consignment to be rejected. Two commercial orchards remain in the area: Stud Fruit Farm on the Tenbury Road and Mill Orchards in Great Witley. Many of the old orchards and hedgerows have now disappeared, but there are a few partial rows of trees left in gardens or fields which still blossom in springtime and you can still find the occasional Damson tree in the hedgerow.

If you want to learn more about Worcestershire Orchards then the following websites make interesting reading: