Derek Hurst and Rob Hedge of the Worcestershire Archive and Archaeology Service have written the following report on our most recent excavation on Wynniatts Way in April:

The second phase of fieldwork by the Worcestershire Archive & Archaeology Service, working in liaison with local volunteers for the Medieval Abberley Revealed project, was targeted on the high ground at the top of Wynniatts Way. One reading of the documentary evidence and historic maps had suggested that this might be the location of a castle mentioned by John Leland, a Tudor antiquarian, who surveyed English and Welsh monuments for Henry VIII. This was, therefore,  exploratory fieldwork, as there were no obvious indications of a castle on the ground at this location, so we began by opening test pits, each a metre square.

Test pit digging near the summit of the hill

Finds were extremely scarce. However, the careful sieving paid off as from a test pit towards the summit of the hill a tiny piece of flint was recovered, and flint at this location is always going to be evidence for early prehistoric activity (see below).

At the lower site to the north side of the road, finds were also scarce and in one case very surprising as an unopened can of Skol lager was found! (best before January 2006). This encouraged the view that this was a favoured picnic spot. The avenue of trees leading up from Abberley Hall lodge, and shown on a 19th century map, suggests that the view from this location may long have drawn people to this spot.

Tantalising hints of the remains of ditches and banks around the upper slopes of the site, and the presence of long grown-out coppiced trees amongst the young woodland growth, indicate human activity and careful land management over many centuries.

So, have we found a castle?

Well it does not look hopeful. However, archaeological fieldwork indicating negative results is just as important as eliminating possibilities and so enabling the evidence to be reviewed and a new research course to be set. That process is now getting under way, and the final report will examine the evidence again and attempt to provide a fresh perspective on the subject of Abberley castle. 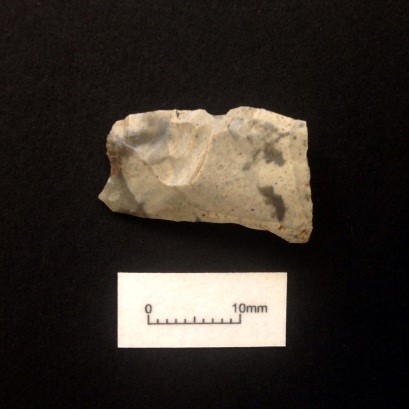 The single piece of prehistoric worked flint recovered was a small flake about 20mm in diameter, struck from a nodule (known as a ‘core’). This is not a specific ‘tool’, but rather a piece of ‘debitage’, the waste material produced during the difficult process of turning a lump of flint into useable and carefully proportioned tools. Worked flint is often one of the few surviving indicators that, thousands of years ago, people were living and working in the landscape.

More technically speaking, it can be described as a possible rejuvenation flake from a small multi-platform flake core in a light, mottled blue-grey medium-grained flint, and of Mesolithic to Bronze Age date.