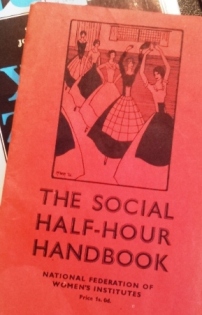 WI social activities were often at the centre of village life

The introduction of labour saving devices & increased sanitation increased the amount of time women could spend at leisure or pursuing social activities.  Less compelled to carry out manual labour, women were also able to develop their handicraft skills because they wanted to rather than had to.

Once clothes & fabric came off the ration in May 1949, dressmaking experienced a huge surge as women sought to make their own versions of the fashions they saw in magazines, mail-order catalogues or the cinema.

Amateur dramatics were increasingly popular after the war as both men & women had more time to spare.  Repertory theatres & cinemas experienced their highest audiences.

WI memberships at their peak in the 1950s.

1950 : NFWI celebrated the beginning of the 1950s with a national music festival. Ralph Vaughan Williams’ Folk Songs for the Four Seasons was specially commissioned for the event.
The furnishing of Denman College continued with many federations making quilted bedspreads for their county bedrooms

1952: NFWI Craft Exhibition was staged at the Victoria & Albert Museum; the centrepiece was a huge wall hanging depicting the Work of Women in War, which had taken WI members all over the country four years to make.

1958: A flower show was held at Denman College; & the WI had a market place at the Ideal Homes Exhibition.

1961: WI had a market place at the Ideal Homes Exhibition.
The Pre-school Playgroups Association (PPA) was founded

1965: Golden Jubilee Year – There were numerous Golden Jubilee celebrations including a specially commissioned poem from the Poet Laureate C. Day Lewis.
WIs were invited to compile Scrapbooks of the Countryside & many of these are now deposited in the archives of Local Record Offices.