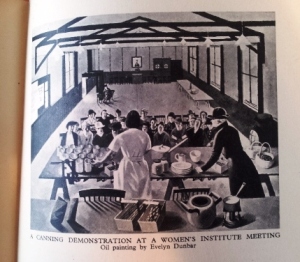 We looked into the history of the village during World War Two and found that Abberley WI disbanded between 1940 and 1943, because all the available meeting halls were requisitioned for war use.

We looked at many of the following sources

SECONDARY SOURCES
There are dozens of possibles – the Imperial War Museum website is brilliant as are their publications. Of particular use are:

1938: NFWI held WI War Week, when plans were made to organise evacuation at the time of the Munich crisis. Lady Denman was asked by the Minister of Agriculture to become Director of the Women’s Land Army, which she accepted whilst remaining Chairman of the NFWI.

1940: The Ministry of Food allocated sugar to NFWI to be distributed to WI Preservation Centres in order to make jam & can produce which would otherwise go to waste. All the produce then went into the nation’s food supply.

1941: NFWI published a report based on a survey carried out amongst WI members who housed evacuees, Town Children through Country Eyes. This stimulated a national debate about support for families ultimately leading to the setting up of family allowances after the war.
WI members raised money for ambulances

1943: The first AGM since 1939 was held; resolutions discussed included urging the Government that equal facilities for full education at all levels should be provided in town & country & a demand that men & women should receive equal pay for equal work.

1947: Operation Produce was launched during this year, to encourage WI members to grow more food in their gardens & small holdings, as rationing continued.